Hi, loving paperpile so far. I have a feature request related to getting papers from the ACL Anthology. At the moment, if I use the built in search, results don’t show up from there; however, if the paper exists there I would prefer to grab the citation from there. I am able to go to the anthology cite and add a paper using the extension (e.g. https://www.aclweb.org/anthology/P19-1365/) and everything shows up fine. It would be great though if this were built into the search since the acl anthology provides a search feature (eg, https://www.aclweb.org/anthology/search/?q=https%3A%2F%2Fwww.aclweb.org%2Fanthology%2FP19-1365%2F)

Just to clarify, if I am on the anthology site, I can click the add to paperpile and everything works correctly. What I was hoping for was to have this work in the integrated search within paperpile

Could you give more information about the missing meta tags? I believe ACL Anthology is open source, so might be possible for me to do a pull request if its easy

Sorry Pedro - I got mixed up and gave you bad advice (now removed to avoid confusion). ACL does have meta-tags which work fine for our import tool - the search result buttons belong in a different realm. I’ve reached out to the dev team to check if we can add support for this, will let you know if it’s feasible now or if it might take a little longer.

Hi,
I’m currently trying out paperpile and I’m loving it so far!
Has the feature been added yet? I’d also find it extremely useful to have metadata auto-updating from the ACL anthology, as it constitutes the main repository for my research.

Thanks for bumping this, @Ludovica_Pannitto. No integrated import buttons on ACL Anthology yet, I’m afraid - it’s not something we’ve been able to prioritize since initially requested by @pedro. A couple other users have also mentioned how useful it would be since then, so the topic has gained more popularity. I’ve added your +1 to the topic on our internal tracker and will bring it up with the team again in case there are any updates or expectations - will let you know if that’s the case. 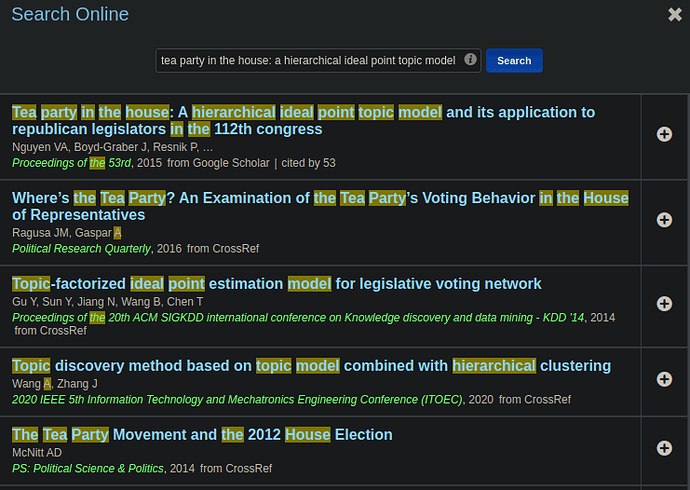 It would be great if the backend data update also made this work with auto-updating so that say arxiv papers that appear in the ACL Anthology are updated to the published version, if it exists.

I’m not familiar with how the backend search works, but is it primarily a matter of adding the acl anthology as a “database” to pull from?

I think I’m referring to a slightly different issue, so I’ll just describe my problem and then maybe @pedro can correct me if he doesn’t see this problem or has already found a workaround that I’m not aware of.

What I typically do is adding papers from google scholar (or from the unified search box that as @pedro pointed out does not show results from aclweb) which most of the times has the wrong bibtex because it comes from arxiv or personal websites or public repositories that are automatically harvested.

At this point I’d like to “auto-update” from paperpile and get the right metadata from the acl anthology, if the paper is there. This doesn’t happen, and I end up needing to explicitly search for the title in the anthology, and having to add that also to paperpile.
Here’s an example of what I end up with:

At this point I have two versions of the same thing, where the one that I need required a couple of manual more clicks that I’d like to avoid, and the two versions aren’t even recognized as duplicates.

I think that is related to my request that auto-update works. Specifically, the use care for this would be if I add an arxiv paper that is later published at ACL.

For papers already published at ACL, I typically use the ACL Anthology search and add the paper to paperpile from there (https://www.aclweb.org/anthology/search/?q=test)